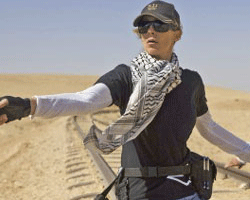 With the countdown to the Oscar nominations in full swing, OFCS members have been predicting, all through January, the nominations in four major categories. This week, our final prognostications: Best Director.

(Note that we’re not picking the directors we think are the best of the year, but which filmmakers we believe AMPAS will honor with nominations. The winners of the 2009 OFCS Awards are here.)

The OFCS prediction for the 5 Best Director nominees, in alphabetical order, are:

Results were calculated on a simple vote basis of one point per vote. With 39 members participating in the poll, Kathryn Bigelow was, by a nose, the director considered most likely to receive a nomination, so we’ll go out on a limb and predict that Bigelow will, in fact, win the Oscar for Best Director of 2009 for her film The Hurt Locker.