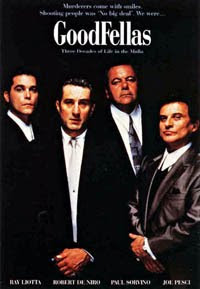 In advance of the release of his latest film, Shutter Island, the members of the Online Film Critics Society have voted Goodfellas their favorite Martin Scorsese narrative (ie, non-documentary) movie. The 1990 mob drama came out on top by a slim margin: with 37 members voting, 10 named the film their favorite, but the second ranked movie was close behind. Other films that received at least one vote:

One member took exception to the exclusion of Scorsese’s documentaries:

I find it impossible to believe that the list presented does not include his many incredible documentaries. The Last Waltz and No Direction Home are far more qualified to be on a list of Best Scorsese Movies than Age of Innocence, The Aviator or Bringing Out the Dead. And then forcing one to pick a single film above so many greats! I must pick what will be considered an underdog, Kundun, for its simple beauty and unparalleled humanity. A true classic waiting to be discovered by less snarky, mean-spirited and grossly over-entitiled generations.

Several movies are obviously better, but King of Comedy remains a favorite in terms of rewatchability.

The King of Comedy anticipated 25 years of fame for fame’s sake.

On Casino, one voter said:

And The Aviator’s one adherent said:

What I love about The Aviator is how much of his love of film history is embodied within its gorgeous frame.