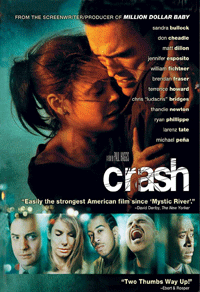 By a relatively wide margin, the members of the Online Film Critics Society have voted Crash, which won the Academy Award for Best Picture for 2005, as the film least deserving of that award in Oscar history.

With 38 members voting, 11 chose Crash as the film as the least-worthy Oscar Best Picture ever. One member complained:

I’m just going to pick Crash as a movie I felt was flatly undeserving, since I’ve been writing about movies. There are many years where I think the movie that won was the wrong movie (Rocky over Network, Forrest Gump over Pulp Fiction), but Crash isn’t just worse than all of its competition, it’s just a poor, melodramatic movie. American Beauty has some of the same problems, but that has several excellent performances in it to make up for it.

Beyond this “winning” film, however, there was less consensus, with the remaining votes spread across 15 movies:

Asked to optionally comment on their choices, however, the detractors of Driving Miss Daisy were most vocal. Said one member:

Spike Lee is correct. How does the Academy justify rewarding such a “safe” formula flick like this and ignore Do the Right Thing? (but this is only one of many erroneous selections over the years–tough choice to make)

Although Miss Daisy is a good film, the actual Best Picture of 1989 wasn’t even nominated. I’m referring to Spike Lee’s Do the Right Thing – a movie whose power is still felt today, unlike Miss Daisy, which has become irrelevant. The snub of Lee’s masterpiece remains one of the most egregious errors in Oscar history.

There’s a category for CGI work, which is all Titanic deserved recognition for. Otherwise it’s a familiar and sappy romance that should have been blown out of the water by Good Will Hunting or As Good as It Gets.

Titanic was obviously a crowd pleaser but in the face of a more deserved candidate like LA Confidential, it just doesn’t stack up. Not to mention I consider Titanic to be one of the worst movies ever made.

Finally, the one voter for Gandhi said:

A fatuous bore, and historically dishonest to boot. Who would ever deliberately set out to watch this squareheaded snoozer today?