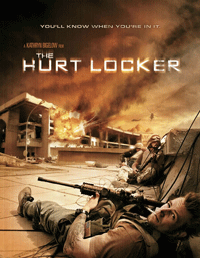 In advance of the release of Green Zone and the possibility of The Hurt Locker winning Best Picture at the upcoming Oscars, the members of the Online Film Critics Society have voted Kathryn Bigelow’s movie about an American bomb disposal squad in Iraq the best movie about the Iraq/Afghanistan/GWOT war. With 34 members responding to the poll, The Hurt Locker came out on top by a wide margin: 22 votes.

Other films that received at least one vote:

The Messenger (3 votes)
In the Valley of Elah (2 votes)

And with one vote apiece: