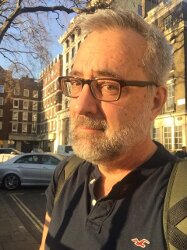 ABOUT RICH CLINE
Rich Cline is a freelance journalist based in London. Born in Los Angeles, he has covered film and sporting events on six continents and is the vice chair of the London Film Critics’ Circle. He currently covers film weekly for Contactmusic and Shadows on the Wall, as well as other print, online and media outlets on a freelance basis.As a member of the London Film Critics’ Circle, Fipresci, Online Film Critics Society and Galeca, he has served on film festival juries in North America, Europe and the Middle East.