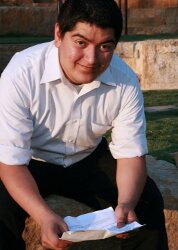 ABOUT KIKO MARTINEZ
Kiko Martinez graduated from Our Lady of the Lake University in San Antonio, Texas in 2003. He received his bachelor’s in communication arts with an emphasis in journalism. From 2002-2007, Martinez was the entertainment editor for La Prensa Newspaper in San Antonio. In 2004, he began his professional freelance film writing career with the San Antonio Current (sacurrent.com), the city’s only alternative weekly publication, a position he currently holds today. Along with the Current, Martinez has written about film and interviewed a host of celebrities for a number of publications, including the Orlando Weekly, Detroit Metro Times, Extra Chicago and Remezcla.com, among others. Martinez also helms his own film critic website at CineSnob.net where he posts all his film and TV-related work. He also contributes reviews for TV and radio: News4SA (NBC affiliate) and 96.1Now. He is member of the Broadcast Film Critics Association and Houston Film Critics Society. Martinez’s favorite film of all time is P.T. Anderson’s 1999 drama “Magnolia.” He hopes to one day sit down with Anderson and pick his brain about frogs.