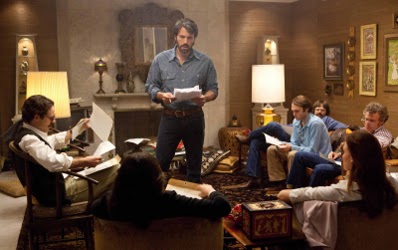 The Online Film Critics Society has announced the winners of its 16th annual movie awards. Ben Affleck’s film Argo, about the fake film shoot that was used as a cover to extract six Americans from Iran during the Iran Hostage Crisis, was named by the organization as the Best Picture of the 2012. The film was also recognized for its screenplay by Chris Terrio based on an article by Joshuah Bearman.

The year’s most nominated film, The Master, received two prizes including the Best Director prize for Paul Thomas Anderson and the award for Best Supporting Actor given to Philip Seymour Hoffman. The other acting winners were Daniel Day-Lewis who received his third award for Best Actor from the OFCS for his work as the 16th president of the United States, Abraham Lincoln; for Best Actress in the film Zero Dark Thirty, Jessica Chastain; and Anne Hathaway receiving the Best Supporting Actress award for Les Misérables

Wes Anderson and Roman Coppola were jointly award the award for Best Original Screenplay for their work on the Anderson-directed Moonrise Kingdom, Roger Deakins’ work on Skyfall was awarded with the Best Cinematography prize and Cloud Atlas editor Alexander Berner was also selected as the best edited film of the year.

The Best Animated Feature of the year was ParaNorman while the Best Film Not in the English Language was Holy Motors. The Best Documentary prize was given to This Is Not a Film, which was also given a special award by the organization.

Along with Mojtaba Mirtahmasb, This Is Not a Film director Jafar Panahi recorded a documentary about his creative processes while under political arrest in Iran, forbidden from making motion pictures. The Online Film Critics Society gave one of its three special awards to the the pair for their act of protest against the Iranian government. The second award was given to legendary composer Ennio Morricone for his amazing and celebrated career in films. The final special award was given to the “For the Love of Film” program and Fandor in conjunction with the National Preservation Foundation for their work this year to raise money for an exhibition of the restoration of one of Alfred Hitchcock’s oldest works, The White Shadow.

Founded in 1997, the Online Film Critics Society has been the key force in establishing and raising the standards for Internet-based film journalism. The OFCS membership consists of film reviewers, journalists and scholars based in the U.S., Canada, Europe, Latin America and the Asia/Pacific Rim region. For more information, visit the Online Film Critics Society at test.ofcs.org.